George Cheriyan, director of Jaipur-based Consumer Unity & Trust Society (CUTS), has been recognised as the Rhoda Karpatkin International Consumer Fellow for 2013 for his significant contribution to the welfare of consumers, reports DHNS from Jaipur.

He was given the title in the annual conference of American Council on Consumer Interests (ACCI) in Portland, US.ACCI, set up in1953, is a leading membership organisation for academicians and professionals involved in consumer and family economics.

While accepting the title, George Cheriyan also delivered the Rhoda Karpatkin International lecture on the topic ‘consumer protection regimes around the world with special reference to the state of the Indian consumer’.

He has been heading CUTS Centre for Consumer Action, Research and Training since 2003.CUTS is an Indian-origin international consumer organisation established in 1983 and presently working in more than 30 countries.

George is also a member of the Central Consumer Protection Council under the Union consumer affairs ministry and several other international such agencies.

The Rhoda Karpatkin Consumer International Award was established in 2005 to honour the pioneering work of Rhoda Karpatkin. The award recognises those who have made significant contributions for consumers on the international stage.

Since1973, ACCI has honoured scholars in this field globally, and 11categories of awards are given every year. Over100 researchers from the US and10 other countries, including Australia, Belgium, Canada and China, attended the conference. George hails from Ayroor in Pathanamthitta district of Kerala.

This news item can also be viewed at:
http://www.deccanheraldepaper.com/ 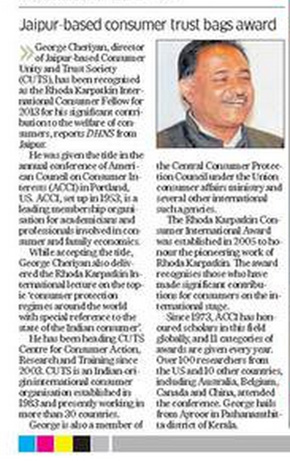