Worldwide explosion of digital consumption, ever increasing financial frauds and similar other new consumer concerns calls for a certain amount of changes in the guidelines for consumer protections. Besides, stronger recognition of consumer organisations is the need of the hour.” This was observed by Helen Mc Callum, Director General, Consumers International (CI) while welcoming the gathering of the two day long Global Meeting on Review of United Nations Guidelines for Consumer Protection (UNGCP). 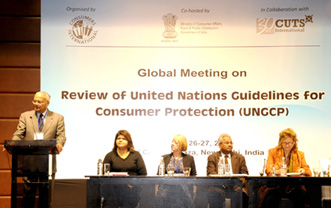 The event is organised by CI in collaboration with CUTS International and co-hosted by the Ministry of Consumer Affairs, Government of India at Hotel Crowne Plaza, New Delhi, India on 26-27 Feb 2013. The meeting is attended by experts working on consumer issues across various sectors around the globe.
The UNGCP adopted in 1985 are an international reference point for the consumer movement and CI has been recognised by United Nations Committee for Trade and Development (UNCTAD) last year to work with its members over the coming months to feed in proposals on how the guidelines can better address the concerns of today’s consumers. Today’s meeting is first such initiative.

Pradeep S Mehta from CUTS International expressed the concern of lack of any international efforts towards consumer protection since 1985. Underlining that the guidelines was revised only once in 1999 to insert a new section on sustainable consumption and production to reflect environmental concerns that emerged during the 1990s, he welcomed the move to revise the guidelines now after a decade. Pradeep was giving a historical review of CIs work on UNGCP during the inaugural session.

Pradeep also underlined the need for developing a work plan by UNCTAD and United Nations Economic and Social Council (ECOSOC) together before 2015. This was supported by Caitlin Wiesen, UNDP Country Director, India during her opening address.

Speaking on the occasion Pankaj Agarwal, Secretary, Ministry of Consumer Affairs, Food & Public Distribution expressed the plight of existing legislations in country that are heavily production oriented. In today’s time, given the complexity of transactions, consumers are hopelessly least concerned of their benefits. New instruments of consumer protection need to be devised or framed rather than approaching courts to the rescue. All these calls for an active contribution principally by younger generation.