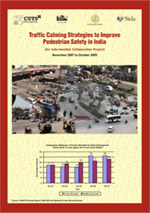 Jaipur stands third in the road accidents in India. More than 152 pedestrians were killed in traffic accidents and 579 were injured in the year 2006. Despite rapidly increasing accident counts, no funds have been allocated for road safety till date.

The increasing pedestrian accident rate in Jaipur alarmed CUTS and it initiated a unique project entitled, ‘Traffic Calming Strategies to Improve Pedestrian Safety In India’, in active partnership with the Department of Technology and Society, Lund University, Sweden and with the support of the Swedish International Development Agency (SIDA), New Delhi.

The study aims to highlight the key flaws in the design of Indian roads and develop a manual, first of its kind in India. The manual will contain suggestions/recommendations on ‘remedial traffic calming strategies’ for concerned policy/decision makers, primarily in the departments of Police, Transport, Municipal Corporation, Development Authority and Public Works. About 24 sites in six locations would be studied for a detailed investigation of roa crashes involving pedestrians. 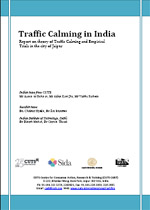 Report on theory of TCS 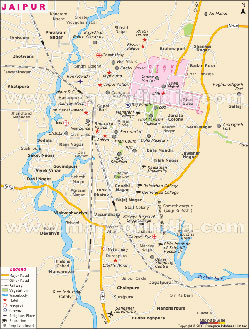 As a part of the project, a two-day training programme on selection of sites for the Indian team was organised in Jaipur, Rajasthan, on March 04, 2008. Prof. Christer Hydén, Department of Technology and Society, Lund University, Sweden along with Prof. Geetam Tiwari and Prof. Dinesh Mohan from Indian Institute of Technology (IIT), New Delhi explained various important issues for selecting an appropriate site.

A primary survey was conducted to collect accident details from registered FIRs from the police for the year 2006. The data revealed many high-risk zones for pedestrians in the city; 31 locations were short listed and visited, out of which 17 locations have finally been selected for research studies. The field studies would include video recording of traffic for four days at each site. The Swedish expert Prof. Christer Hydén will provide remedial measures for each site after the analysis. 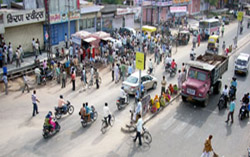 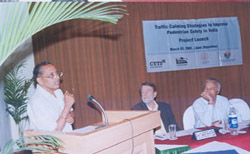 In today’s world road and transport has become an integral part of every human being. Every body is a road user in one shape or the other. India has seen a rapid growth in vehicles in conjunction with the increase in population and urban mobilistaion, which has resulted in high traffic volumes. This in turn has increased the number of road accidents.

In India itself about eighty thousand people are killed in road crashes every year, which is thirteen percent of the total fatality all over the world. In most of the cases crashes occurs either due to carelessness or due to lack of road safety awareness of the road user. Hence, road safety education is as essential as any other basic skills of survival. Jaipur, with a population of more than 35 lakhs and a total registered vehicular count of more than 9 lakhs, presents immense challenges to road safety.

In the light of this problem CUTS in partnership with Lund University, Department of Technology and Society, Sweden and with the support of Swedish International Development Agency (SIDA), New Delhi.

The project aims at identifying accident prone sites in East, West, North & South Jaipur, studying the shortcomings and causes that make these sites accident-prone and then developing and testing holistic traffic calming strategies on one of the selected sites in each of the locations. The project intends to test and modify measures developed and found efficient from safety point of view in Sweden and other highly motorized and developing countries. The aim is to find out whether these measures and will have a desirable local impact on the behavior of different kinds of Indian road users- primarily pedestrians and car drivers. Those measures that are found to be effective in Indian conditions will then be summerised in a manual for the Indian traffic police personnel, planners and engineers suggesting remedial road designs that would help in calming traffic. No such manual exists till date in India.

Objectives (Expected Outcome, Results and Benefits of the Project)

Five workshops (one each at Delhi, Mumbai, Kolkata, Bangalore and Jaipur) are proposed to be organised in which the findings of the after studies or/and the results of the expert assessment will be presented. Local authorities, experts, policy/decision makers of that region will attend the workshops.

The manual will be documented taking in all the inferences of traffic calming measures in Indian context. The final version will be presented to the Advisory Board before distribution to the concerned departments such as Transport, Traffic, Development Authorities and Municipal Corporations in the entire Country.

The Department of Technology and Society, Lund University, Lund, Sweden

The Department of Technology and Society of the Lund University has a long-term investment in road safety research as well as teaching. In 1970s, the Department developed ‘Traffic Conflicts Technique’, validated it and started using it on a large scale in many traffic safety projects. The Department in 1991 was awarded the ‘Volvo Traffic Safety Award’ of SEK 500,000 (US$62,000) for the development of this technique and linking it with research and implementation.

Since 1970s, the Department has been dealing with safety of vulnerable road users, primarily pedestrians and pedal cyclists. Over the years, many sub-areas have been covered, i.e. relation between speed and accidents/injuries; relation between physical design and speed; relation between layout of intersections and safety of vulnerable road users; roundabouts and behaviour and safety; Traffic Calming [first project in the late 1970s), Intelligent Speed Adaptation (ISA), i.e. speed limiter installed in vehicles] etc.

The main contribution of the Department related to this project is:

Although the research team and the implementing agency analyses the project activities, share their views and provide suggestions as well for reducing the rate of road accidents in the future, but no major changes can even be thought of without the active involvement of the decision-making government authorities as they are the one who really have to act on the suggestions allowing modifications and changes to the existing roads and traffic conditions.

Such an approach raised a need to form a Project Consultative Group (PCG). Communications and meetings with the stakeholders were held and a PCG was formed, which includes representative officers from important stakeholders, such as Traffic Police Department, Transport Department, Municipal Corporation and Development Authority. PCG comprises of the below mentioned people:

The members of the PCG can be approached from time to time with the remedial solutions by the implementing agency.

A primary survey was conducted to collect accident details from registered FIRs from the police for the year 2006. A format was developed to collect the information in a systematic manner, i.e. Accident Severity (Fatal/Non-Fatal), Victim (Type, Sex & Age), Date & Time, Impacting Vehicle, Location (Address & Land Mark). The team visited 37 police stations across Jaipur and collected all the required details as per the criteria developed in the training programme. Sites for data collection were short listed on the basis of this data.

Site selection for Before Studies

A tentative site selection was done, considering various factors such as locations at different types of roads as well as locations with high pedestrian accidents. Thirty-one (31) sites were short listed for the purpose of final selection of sites for ‘Before Studies’. The traffic at each identified location was observed and the location of camera at site was finalized.

Conflict technique primarily focuses on manual & video recorded near accidents between two road users. According to this technique, primarily there are only two road users involved. There are two basic factors to be observed, Time to Accident (TA) and Conflicting Speed (CS). The time (tenth of seconds) that goes from somebody starts evasive manoeuvres, until a collision would have occurred if the two involved road users had continued with unchanged speed and direction then it is known as Time to Accident. Conflicting Speed (CS) is the speed of the vehicle (km per hr) defined as the relevant road user just at the start of the evasive manoeuvre. Severity of conflicts is defined by its position in the “TA-CS” graph. A serious conflict is a conflict that ends up to the left of the borderline in the “TA-CS” graph. 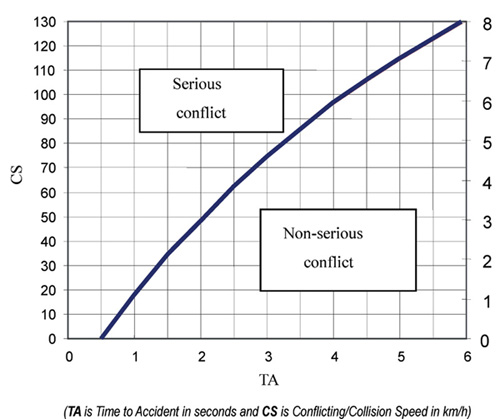 Video-filming the traffic is used as a tool for recording conflicts; so, the job of finalising a suitable camera position and obtaining permission of building owner whose terrace has to be used for this purpose was difficult. At each location, the residents and shopkeepers from the vicinity were contacted and briefed about the project and its objectives. The Jaipur Municipal Corporation (JMC) consented to provide their vehicle for fixing the camera on streetlights.