In the recent years India’s energy consumption has been increasing at one of the fastest rates in the world. India ranks fifth in the world in terms of primary energy consumption. India is going to reach at the second rank by 2030. India’s power consumption will double by 2020. About 70% of India’s energy generation is from fossil fuels. However there is a power deficit of 13.8 per cent during the end of previous year. While various steps are taken to increase the supply but demand side management can be a most cost effective solution to the growing demand –supply gap.

Consumers need to be clear and have precise information about the energy efficient products and services available in the market so that they can contribute in reducing the use of energy. Government, companies, consumer organisations and other concerned organizations need to disseminate the information regarding saving energy through the use of various energy efficient products.

‘Save to survive’ is an awareness campaign for generating awareness among consumers of energy. CUTS is running the campaign with the support of Consumers International and Swedish Society for Nature Conservation (SSNC). The campaign involves various activities such as consumer awareness camps in market places, street plays, stake-holders’ consultation on energy efficiency etc. 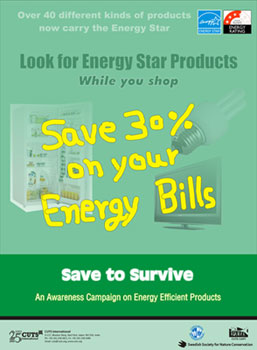 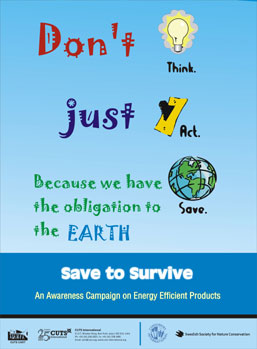