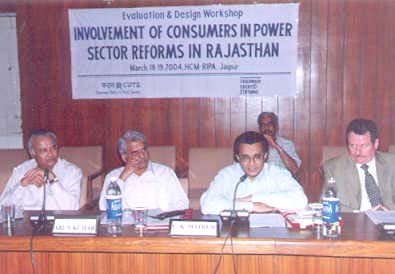 Aiming at facilitating consumer involvement in power sector reforms CUTS and Friedrich Ebert Stiftung (FES) jointly launched the programme ‘Involvement of Consumer in Power sector Reforms’ in six select districts of Rajasthan in August 2001. The process and methodology for achieving the stated objectives was finalised after rigorous consultation with all stakeholders, consumer groups, civil society organisations, regulator, utility, polity, and the government. Broadly the programme has the following three-fold approach; (i) Advocating at policy level to achieve greater institutional space for consumer concerns; (ii) Building capacities of grassroots consumer groups to enable them representing their concerns at available forums, and play vigilant ‘watchdog’ (iii) Creating awareness among these groups of their rights & responsibilities
About the workshop

Since the programme is running in six select districts of Rajasthan on pilot basis, the workshop was organised with specific objective of let all involved stakeholders critically evaluate the approach followed in this programme as well as outcomes thus far; and further fine tune the future strategy.
Proceedings
Pradeep Singh Mehta, Secretary General CUTS briefly explained about the rationale behind CUTS-FES initiative as well as outcomes thus far. This was followed by remarks from Dr. Manfred Haack resident representative FES India. Dr. Haack expressed satisfaction about the value the programme has been delivering to consumers, regulator and utilities. He opined for scaling up this initiative from pilot stage and spread over entire Rajasthan, replicate in other states too. Dr. Haack also expressed that many countries are facing similar challenges therefore it would be useful to prepare a blue print of this successful best practice and with those parts of the world.

Arun Kumar, Chairman, Rajasthan Electricity Regulatory Commission, emphasised to go ahead with similar approach and to cover the entire Rajasthan to the block level. He mentioned that this initiative would bring in the attention of other stakeholders to the neglected ones called consumers. He particularly emphasised the need for creating more and more ‘watchdog’ in all parts of the state so that consumer representation could be enhanced to the regulatory commission both qualitative and quantitative manner. He suggested for CUTS to keep playing the role of consumer representative in organised manner and amplify the neglected voice. He proposed to CUTS to take up a comprehensive study to see the extent to which distribution companies actually maintaining the standard of performance till the grassroots.

The representatives of those consumer groups have been involved in executing this programme in Sawai Madhopur, Alwar, Jalore, Sirohi, Chittorgarh, Bhilwara districts of Rajasthan strongly recommended to take up more intensive activities till the block/village level in a delegated manner and also to spread the activities in other parts of the state.
Recommendations
Following are the broad recommendations emerged out of the group work and deliberations:-

To nurture and develop nodal organisations at every district level and build their capacities to serve as resource centre on these issues for all grassroots (block/village level) organisations of the district.