Established in 1996, CUTS Centre for Consumer Action, Research & Training (CUTS CART) is a research and advocacy Centre. This Programme Centre was created as a result of diversification of CUTS in order to move ahead with its inherited agenda: consumer protection and education, and to create a more responsible society. Continuous pioneering work in the area of consumer protection found CUTS CART at the forefront of the consumer movement in India and beyond. So far, the Centre has trained over 1200 activists and created 300 independent groups in Rajasthan and elsewhere. Moreover, CUTS CART is credited to have about 1000 organisations in its network.

The Centre has formulated its own vision statement and strategies and has got more than 10 affiliations from all over the world due to its continuous interventions in the country and other parts of the world.

Consumer Unity & Trust Society took a strong objection to the views of those who are opposing privatisation of the electricity sector in India.

For over fifteen days, more than one lakh (0.10mn) employees of Uttar Pradesh State Electricity Board (UPSEB) are on strike, opposing the trifurcation of the behemoth into three parts: one will look after the generation of thermal power, the second one for hydro power, while the third one for transmission and distribution. This strike was supported by employees of State Electricity Boards of 16 other states, including Rajasthan, where one-day token strike was observed, which was partially successful.

CUTS is of the opinion that employees went on to strike to protect their self-interests and those of other vested interest groups. “It is not true that employees are unaware of the fact that State Electricity Boards are running deficits due to huge debt, transmission and distribution losses and theft, administrative inefficiency etc,” said Pradeep S. Mehta, Secretary General of CUTS.

Privatisation will not only improve financial conditions of State Electricity Boards but also will make employees more accountable to consumers, he added. Thus, CUTS urges employees to call off this unlawful and undemocratic strike and understand the fact that ordinary citizens will benefit from privatisation, with proper regulation.

Furthermore, CUTS made an appeal to the Government of Rajasthan that at the time of the implementation of privatisation programme in the state electricity sector, the concerned authority should consult all stakeholders (including consumer representatives) and take on-board other related issues as well, so that there will not be any half-hearted attempt which may not bring relief to ordinary users of electricity.

Striking Employees and the Rajasthan Government: Who Suffer!

Government employees of Rajasthan are on strike since the middle of December 1999. After more than a month there is no concrete steps towards ending the strike.

The authorities have tried to force employees to do their duties by enforcing the Essential Services Maintenance Act, but striking employees are adamant. Furthermore, employees of the Rajasthan State Electricity Board have also threatened to go on strike.

It appears that both parties do not have any understanding that government revenues are mostly collected from ordinary tax paying citizens. However, they are the ones who are suffering from non-fulfillment of their right to basic needs, like drinking water etc. The government should seriously think that ordinary citizens are suffering due to disruption in essential services.

As drinking water, public health facilities, electricity are part and parcel of day-to-day life of ordinary citizen-consumers, Consumer Unity & Trust Society is making an appeal to the Rajasthan government as well as striking employees for finding an immediate solution to the problem, and urges other voluntary organisations to make similar appeal. 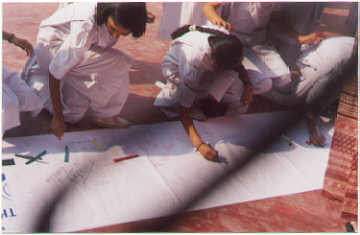 In 1992, the United Nations General Assembly recognised 15th October to be observed as “International Day for the Eradication of Poverty”. Similarly, 16th October, every year, is observed as “World Food Day”. This year, a more challenging objective and agenda was attributed to the World Food Day i.e. “Youth Against Hunger” a phrase coined by United nations Food and Agriculture Association (FAO). Coincidentally, FAO celebrates its anniversary on the same day.

Food is one of the basic ingredients of human survival. Yet, food insecurity still haunts sizeable portion of the population of a developing or least developed economy. The main reason for such kind insecurity could be attributed to inequitable distribution of income with minority of the population possessing majority of the wealth of that nation. In India alone, more than 300 million people are food insecure and poverty stricken. This means that they do not possess adequate purchasing power to buy food, which could fulfil the minimum calorie requirement of human body per day. The problem of poverty and hunger is not only widespread but varies from person to person not affecting everybody uniformly. 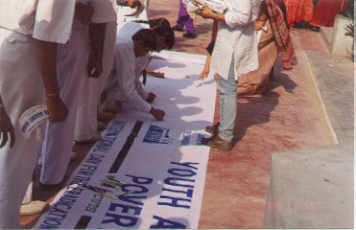 The problems of poverty and hunger are interrelated. These social evils cannot be eradicated in solitude. It requires collective participation and solidarity of the entire community and moreover active involvement and participation of youth. Keeping this in mind Consumer Unity & Trust Society (CUTS), one of the largest consumer organisation in India fighting for people’s rights since 1983, chose to take measures for eradication of poverty and hunger through community participation via a Signature Campaign on 16th of October.

CUTS realises that it is the youth who will eventually take up the fight against hunger and poverty, and this could be achieved only if they are sensitised and gradually mobilised to take up this combat. Moreover, as we steadily close in on the year 2000, we should also recognise that it is the younger generation’s participation that can offer inroads for launching Vision 2000 with the goal of enabling one and all to satisfy at least their basic needs. 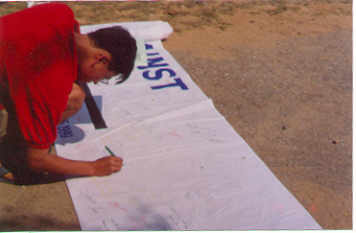 On 16th October CUTS started it signature campaign by taking a jeep decorated with banners and slogans related to World Food Day and Eradication of Poverty to various schools, colleges and public places in Jaipur, Rajasthan. Pamphlets carrying messages like the importance of acknowledging the existence of evils like poverty, hunger and ignorance, and urgency to take steps for their eradication were also distributed among students and the youth. Sun-caps carrying the slogans “World Food Day”” and the theme of the year i.e. “Youth against Hunger” were also distributed to severe as a memento. However, the centre of attraction of this campaign was a 50-meter long banner prepared specially for this occasion. The same was spread on the road for the public to put signatures and slogans.

It was found that very few people were even aware of the significance of the day. Around 1000 signatures were collected. The signatories also contributed with slogans like “Save Food, Save the world”, “Say no to Poverty” etc.

In addition to the Signature Campaign, CUTS personnel also addressed senior school children and invited them to put their signature and messages on the banner. They were explained about the prevailing magnitude of poverty and hunger in India and in what way their small contribution at present could add up to become sizeable contribution in future. They were asked to possess empathy and compassion for those millions who do not have even the purchasing power to buy their square meals. They were encouraged to lobby for the cause at various levels. CUTS feels that this effort should have a multiplier effect leading to enlightenment of a bigger chunk of the society to fight against this vicious circle of poverty.

The local media covered this signature campaign. Through them CUTS expects to spread the awareness about poverty and hunger among larger section of the population. 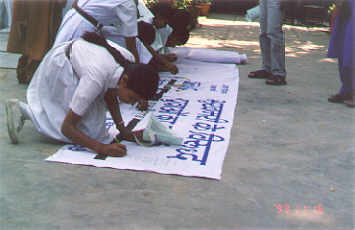 This signature campaign was able to sensitise few hearts and divert their attention towards those fellow beings who are unprivileged as well as neglected.

Some of the respondents were critical and questioned the significance of such campaigns. As the problem of poverty is deep-rooted in our economy therefore results can neither be expected nor achieved in a short time. We must realise that a single day campaign on eradication of poverty and hunger is too trivial to tackle this gigantic problem. However, with adequate follow-up action in the form of workshops and seminar by networking with interested organizations working on similar issues the menace of poverty and hunger could certainly be eliminated in the long run. CUTS would also take various measures, like advocating for the cause, at the level of policy makers and government in the near future.